Official page of the app: https://digitalearthlab.jrc.ec.europa.eu/app/invasive-alien-species-europe

The next NEOBIOTA conference will take place in Vodice (Croatia) on September 15-18, 2020 and is organised by Sven Jelaska, professor at the Department of Biology, University of Zagreb.

All important information concerning dates, registration, booking, fees, etc. are now available at the NEOBIOTA 2020 website. The abstract submission process will start by the end of February and last until March 31st, 2020.

Press release on 17/12/2019 by the Ministry of the Environment, Climate and Sustainable Development (MECDD)
Source: https://environnement.public.lu/fr/natur/biodiversite/lutte_contre_les_eee/reglement_ue_1143-2014/gestion.html

As provided for by Article 4 of the Law of 2 July 2018 (Mémorial 2018) on certain implementing rules and sanctions of Regulation (EU) No 1143/2014, the draft action plans for invasive alien species (IAS AP) are made available to the public on the website of the Ministry of the Environment, Climate and Sustainable Development.

Currently a public consultation on the action plans for 11 species is underway. All comments on these draft action plans should be sent by e-mail to or by post to the Administration de la nature et des forêts (81, avenue de la Gare, L-9233 Diekirch). The deadline for sending your comments and suggestions is 13 February 2020.

On 5 September 2019, Mars Di Bartolomeo, Member of the Chamber of Deputies, addressed a parliamentary question to the Minister of the Environment regarding the European list of invasive alien species.

Which species on this list have been recorded in Luxembourg?

Given that these species pose a threat to biodiversity and ecosystem services, what is his Ministry’s strategy for more effective eradication, management and control methods to combat the adverse effects associated with this phenomenon?

There are two scenarios:

For widespread species, “Invasive Alien Species Action Plans” have been developed, which include the actions to be implemented for each species. All actions thus defined shall be based on the best scientific knowledge and shall take due account of cost-effectiveness, human health, the environment and animal welfare.

A public consultation will be launched shortly for each action plan. 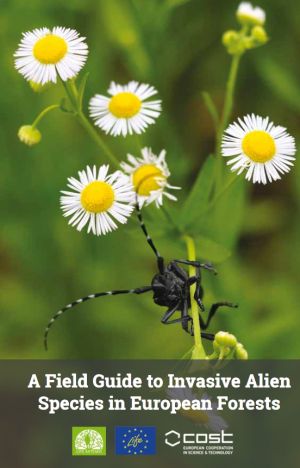 The Slovenian Forestry Institute has published a Field Guide to Invasive Alien Species in European Forests which was translated to English and made available as PDF file.

This guide was first prepared in Slovenian, within the framework of the project Awareness Raising, Training and Measures on Invasive alien Species in forests (LIFE ARTEMIS), which is funded by the European Commission in the framework of the LIFE financial mechanism, the Ministry of the Environment and Spatial Planning of the Republic of Slovenia, the City of Ljubljana and the Slovenian Research Agency.

Solanum rostratum Dunal was first observed in the wild in Luxembourg on 21 August 2019 by Jörg Zoldan and Annette Steinbach-Zoldan on the border of a maize field in the municipality of Kayl (Southern part of Luxembourg), during a field study on behalf of SICONA.

Solanum rostratum Dunal (spiny or prickly nightshade, Mexican thistle) is a species of nightshade that is native to the US and northern and central Mexico. It is an annual, self-compatible herb that forms a tumbleweed and has abundant spines on the stems and leaves. In its native range S. rostratum is pollinated by medium- to large-sized bees including bumblebees. The seeds are released when the berries dry and dehisce (split apart) while still attached to the plant (Wikipedia contributors 2019).

This species represents one of the later scientific interests of famed biologist Charles Darwin, who just over a week prior to his death had ordered seeds from a colleague in America, so as to investigate their heteranthery, a topic he was interested in (Wikipedia contributors 2019).

Solanum rostratum is the ancestral host plant of the Colorado potato beetle, Leptinotarsa decemlineata, but this pest adopted the potato, Solanum tuberosum as a new (and more succulent) host, a fact first reported in eastern Nebraska in 1859. It then expanded its range rapidly eastward on potato crops in the next two decades (Wikipedia contributors 2019).

Solanum rostratum is a taprooted annual plant known to be a noxious weed in parts of the USA and Canada, and is included in the Global Compendium of Weeds as an ‘agricultural weed’, ‘casual alien’, ‘environmental weed’, ‘naturalised’, ‘noxious weed’, and ‘weed’ across tropical and temperate regions of the world. It is a fast-growing, vigorous weed native to Mexico and the United States and now widely introduced including into Asia, Oceania and Europe (Austria, Bulgaria, Denmark, Germany, Hungary, Moldova, Russia, Slovakia, UK, Ukraine). The species invades ecosystems by forming dense colonies, and a single plant can produce hundreds of seeds which are dispersed by both biotic and abiotic vectors, as well as self-propelled by its dehiscent fruit (Datiles & Acevedo-Rodríguez 2014). 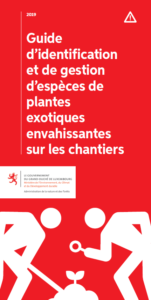 The Luxembourg Nature and Forestry Administration has published a guide on the identification and management of invasive alien plant species on construction sites. The 88-page guide is written in French and can be useful to other concerned parties such as biological stations, municipalities and other state administrations that are active in other activities such as nature sites, the development and maintenance of green spaces and along roads.

The guide can be ordered or downloaded from the following web page: https://environnement.public.lu/fr/publications/conserv_nature/plantes_exotiques_envahissantes.html

A look at the work of the EU COST-funded Alien CSI project which aims to increase understanding of invasive alien species through citizen science. Find out more at the Alien CSI website: https://alien-csi.eu/ 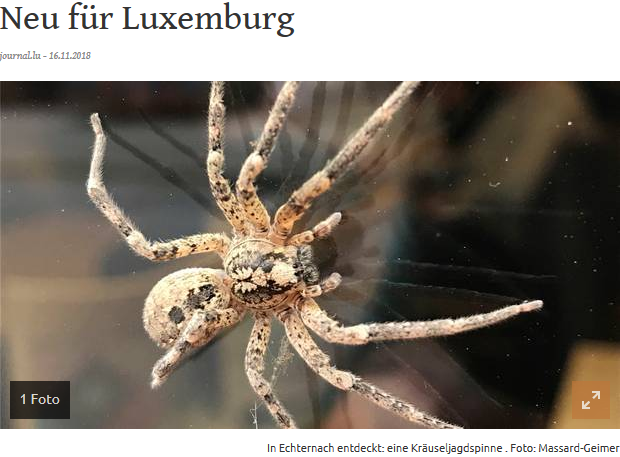 On November 15th 2018 Jos A. Massard and Gaby Geimer discovered a female of the wandering cribellate spider Zoropsis spinimana on the window of a pastry shop in Echternach (Massard & Geimer 2018). This spider is a new species for Luxembourg and is currently spreading throughout Europe. The detailed up-to-date distribution of the species can be found on the Luxembourgian Wikipedia (Wikipedia-Bearbeiter 2018).

The home of Zoropsis spinimana is the western Mediterranean region up to the southern edge of the Alps and Dalmatia, as well as North Africa, where it occurs in the open in light forests, under stones and bark, or in and around buildings (Wikipedia contributors 2018).

In July 2018 a group of countries launched a European CO-operation in Science and Technology (COST) Action to address multidisciplinary research questions in relation to developing and implementing Citizen Science (CS), advancing scientific understanding of Alien Species (AS) dynamics while informing decision-making, specifically implementation of technical requirements of relevant legislation such as the EU Regulation 1143/2014 on IAS. It will also support the EU biodiversity goals of embedding science within society. The Action will explore and document approaches to establishing a European-wide CS AS network.

All details in the following publication: