→ Report Impatiens glandulifera to the National Museum of Natural History.

Impatiens glandulifera Royle occurs in many different habitats, but it thrives best on moist and nutrient-rich alluvial soils. It occurs on meadows, along rivers and brooks, and in floodplain forests, especially in areas disturbed by people. Long-distance dispersal of seeds is aided by flowing water, with fresh seeds transported in sediment on the beds of rivers, and buoyant dry seeds are able to float over large distances. The species may form dense stands that cover the soil, shade and replace native annual and even perennial plant species because of early germination and rapid growth. In some conditions, it can strongly reduce local species richness but this reduction is often temporary and concerns mostly widespread weeds and even other non–native species in ground-water table and flooding conditions. It may also displace native species through competition for pollinators, e.g. Stachys palustris. Its development can facilitate river bank erosion (Branquart et al. 2010).

In 2017, Impatiens glandulifera was added to the list of invasive alien species of Union concern (Anonymous 2017) which implies that member states shall take all necessary steps to prevent it’s unintentional introduction or spread.

With 7803 records of the species listed in the MNHNL-mdata online portal, the species is established in Luxembourg and widespread throughout the country’s riparian ecosystems (MNHNL, iNaturalist & GBIF 2019). Most of these data have been collected during systematic inventories along the main watercourses in 2006-2008 (Glesener et al. 2009) and 2013 (Pfeiffenschneider et al. 2014).

The melliferous Himalayan balsam is one of the most common and widespread invasive neophytes in Luxembourg. It builds huge colonies along riparian ecosystems, often together with colonies of Bohemian knotweed. Several major rivers of Luxembourg are being affected. Huge populations can be seen along the river Sure between Ettelbruck and Michelau.

Since the end of the first decade of the 21st century, Himalayan balsam is increasingly spreading throughout the countryside, leaving the riverbanks and colonising other habitats like roadsides and forests. An example can be seen in the Our valley between Stolzembourg and Dasbourg-Pont, where the Himalayan Balsam managed to “jump” across the main road, to “climb” up the steep slopes and to “enter” the oak forests. Meanwhile Impatiens glandulifera occurs in many forests across the country.

Recent new records have confirmed that this invasive species is increasingly being observed far from any watercourse, often at the edge of forests (Krippel et al. 2020: 39).

Over the past 20 years, the dissemination of I. glandulifera in forest habitats has accelerated, and could be facilitated by (1) the strong pressure of propagules from widely spread riparian populations, (2) major disturbances, anthropogenic or natural, of forest ecosystems, (3) the increased use of forestry machinery capable of transporting seeds and (4) the high environmental tolerance of the species. The impacts of I. glandulifera in forest habitats can include negative impacts on the diversity of native plants and mycorrhizal fungi. I. glandulifera can also have a negative impact on the growth of planted forest plants. Measures listed to prevent the spread of I. glandulifera towards the forests: limitation of the disturbances of the ground and the transport of soil contaminated by seeds, logging before the release of the seeds of I. glandulifera in order to minimize any further spread (Čuda et al. 2020).

Valley of the Syr (Gutland)

In 2016, the federation of municipalities SIAS launched an eradication campaign along the river Syr. The shores of the Syr and its tributaries are partially covered with Himalayan Balsam. Since 2016, the affected parts of the water have been inspected annually and the plants removed if necessary in order to stem the further spread of the plants. In 2018, neophytes were removed over a length of approximately 3.9 km, where around 1.5 km between Moutfort and Oetrange was more severely infested, the 2.4 km from Oetrange towards Schuttrange less so. The annual removal of the balsam seems to improve the water sections (Anonymous 2014b: 4; “Aktionsplan Neophyten” in Anonymous 2019: 4).

Valley of the Blees (Oesling)

On 4 July 2009, the Nature Park Our took his first steps in the management of Impatiens glandulifera on the river Blees under the coordination of Béatrice Casagranda, involving a dozen volunteers, amongst others staff from Foundation “Hëllef fir d’Natur”. At the time, this action was strongly criticized by several beekeepers.

In summer 2017 the Nature Park of the Our Valley launched a pilot project to free the small river Blees (20 km) from Himalayan Balsam, in co-operation with the National Museum of Natural History (Ehl & Gengler 2018; Ehl 2019). At the beginning, the project focused on the first 4 km of the river Blees, in order to avoid new upstream invasions. Several habitats along the river were heavily impacted by the presence of Himalayan Balsam. In the starting year of the project, the management was exclusively done manually, which turned out to be not efficient enough for most impacted zones. The collected biomass is transported for treatment to the biogas plant in Hosingen (Klein 2019).

In the course of 2019, the successes achieved so far in the control of Himalayan balsam on the Blees from the previous year have been confirmed. In addition to a large-scale reduction in linear stands, fewer punctual stands were also detected. It also became apparent that the control of dense stands, which were not very successfully collected by hand in 2017, can lead to lasting success with mechanical measures. For example, after the large-scale expansion in July 2018, the populations in the ‘Iwwer Ehlerhämicht’ area had already declined significantly or even disappeared completely by October after the first mechanical work; even in 2019, only small residual populations were found in this area. However, manual collection, which is a less invasive control method, was successful in the less densely overgrown areas and should continue to be used in such low-density stands or as a follow-up measure after multi-annual mowing (Ehl 2020).

Despite the declines in population observed so far, it is urgently not advisable to stop the systematic control of Himalayan balsam in the northern study area in the upper reaches of the Blees. As described in the literature and confirmed in our observations, incomplete control (even with 99% population decline) is almost as ineffective as if no measures had been implemented at all (Wadsworth et al. 2002). In the Stommert and Ënner Fuusselach areas, larger populations have developed again in 2019 from the existing seed bank or from individual plants remaining in the control areas. Successful control is therefore only possible if every single plant of the Himalayan balsam is removed during control in the future and the currently still existing seed bank cannot renew itself. In addition to the recommended combination of mechanical work in the case of extensive stands and manual collection in the case of smaller stands or in the case of follow-up maintenance, the work must be carried out systematically over a longer period of time (Ehl 2020).

On July 27, 2019, a management action against Himalayan Balsam took place around the Consdorf Mill and the upstream ponds. About ten people participated in the action, which also raised awareness among people walking on the trails adjacent to the managed sites. The green waste generated by the action was evacuated to the Miny biogas facility in Nommern. A problem with the removed biomass was the relatively large volume of soil attached to the roots. In order to avoid this problem in the future, it is recommended to leave the roots on the site (Pfeiffenschneider 2019: 1).

Successful management of Himalayan Balsam has been reported from two regions in France: the catchment areas of the river Risle (Eure) (Royer & Blottière 2019) and the river Graine (Haute-Vienne et Charente) (Fernandez 2015). 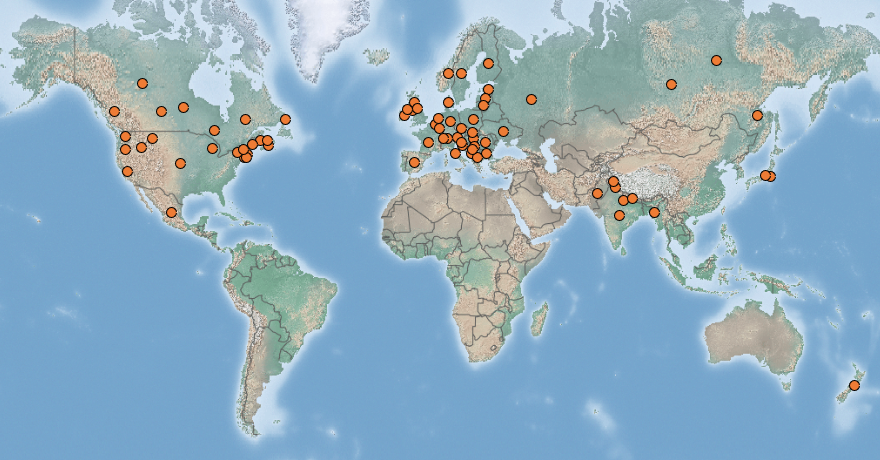 Six alien balsam species have been reported in Luxembourg, Impatiens noli-tangere L. being the only native species.

In early spring 2020 the Department for the Environment of the Luxembourg Ministry for environment, climate and sustainable development edited leaflets in German and French about Fallopia japonica, in co-operation with the National Museum of Natural History and efor-ersa ingénieurs-conseils. They can be downloaded here in PDF format (~ 4 MB each).