→ Report Prunus laurocerasus to the National Museum of Natural History. 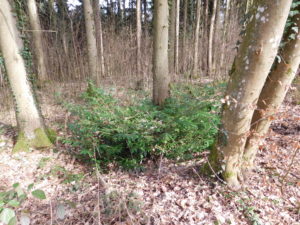 Cherry laurel in a forest near Steinsel. 11/03/2017, Manou Pfeiffenschneider.

Prunus laurocerasus L. is a shrub that thrives in woodland areas with moist, slightly acidic soils, both in well-lit and shaded conditions. Fruits are dispersed over long distances by birds. In recent years, seedlings have increasingly been observed in the wild.

So far, strong invasion by cherry laurel is not known in western Europe. Invasion histories are, however, numerous in southern and central Europe, where the plant rapidly expands by root-suckering, layering and stump-sprouting. It has a dense and permanent canopy that outcompetes native species, prevents forest regeneration and reduces biodiversity. Elevated atmospheric CO2 concentration and global warming recently favoured plant installation in Atlantic conditions as well, where it is likely to become a new threat for native biodiversity. The plant is a potential vector of different Phytophtora pathogens. Leaves contain cyanogenic glucoside that are toxic for humans (Branquart et al. 2010).

A field survey in the region of Basel, Switzerland, assessed the impact of the invasive shrub Prunus laurocerasus on the native vegetation and soil properties in suburban deciduous forests. A lower native plant species richness in both the ground vegetation and shrub layer was observed in plots with presence of P. laurocerasus. A different species composition of the ground vegetation was also found among plots with and without the invasive shrub. Plots invaded by P. laurocerasus had a lower soil moisture content than control plots. The intensity, diversity and substrate richness of the carbon sources were elevated in soil from invaded plots compared to soil in control plots. However, the chemical soil characteristics examined and the activities of enzymes were not influenced by the invasive plant. The effects of P. laurocerasus became more pronounced with the time elapsed since the establishment of the invasive plant. Thus, the removal of young P. laurocerasus individuals would be an appropriate management practice for this invasive shrub species (Rusterholz et al. 2018).

Disposal of hedge cuttings of Prunus laurocerasus in the forest at the edge of the road between Meysembourg and Angelsberg. Photos: C. Ries, 2021-03-12.

The oldest herbarium specimen at the MNHNL was collected in 1952 by Adolphe Molitor in Höhenhof near Luxembourg City (Specimen № MNHNL34303, MNHNL 2000-).

Kariger states “This ornamental shrub, which originates from south-eastern Europe and often runs wild in the Mediterranean region and in western France, is rarely found in this condition in our country”. He then reports first observations in the wild for Luxembourg: the variety with narrow-pointed, sharply toothed leaves in late 1989 (seminary garden on the Würthsberg in Clausen, Luxembourg City; Kuebebierg near Weimerskirch) (Kariger 1990: 86) and the variety with oval leaves in 1990 (Pulvermühl, Luxembourg City; Schlaed, Dommeldange) (Kariger 1990: 94).[1]Original text: “Dieser aus Südosteuropa stammende Zierstrauch, der im Mittelmeergebiet und in Westfrankreich häufig verwildert, ist bei uns nur selten in diesem Zustand anzutreffen. Am … Continue reading

Since 2017, the plant was discovered in forest areas west of Steinsel, between Steinsel and Bridel, in Bereldange, close to the Haard – Hesselsbierg – Staebierg nature reserve next to Dudelange, near Cruchten (Krippel et al. 2018: 70). Since then, further locations have been found which suggest that the species is expanding into the wild (e.g. Findel, Remich). A similar behaviour can be observed in neighbouring Belgium (Henneresse 2014).

Currently, 120 records (2019: 75) of the cherry laurel are accessible through the MNHNL-mdata portal (MNHNL, iNaturalist & GBIF 2021). This trend confirms this species is more and more often observed far from any dwelling (Krippel et al. 2020: 45). 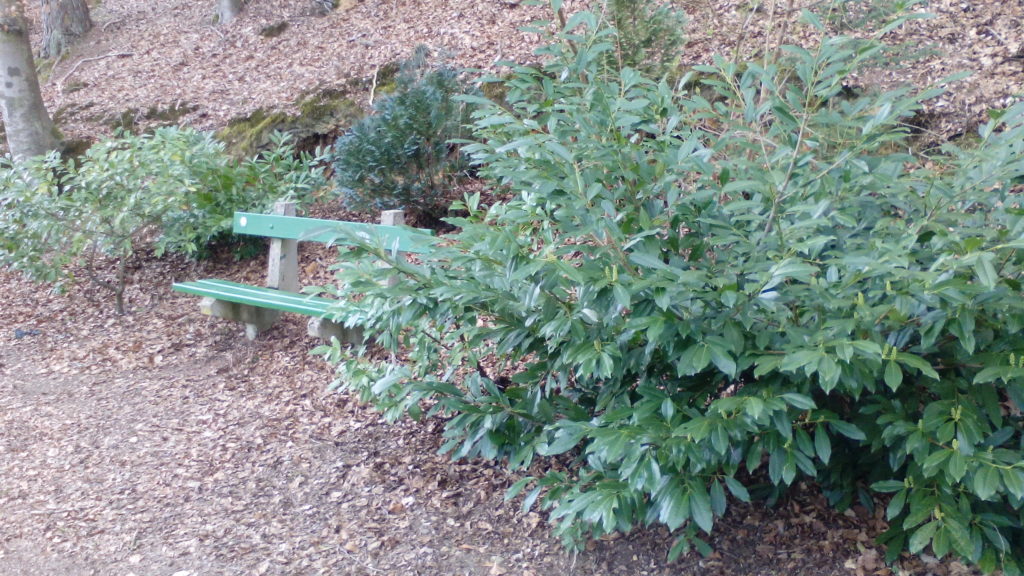 Prunus laurocerasus planted on both sides of a bench along a forest road near Kopstal. Photo: C. Ries, 2019-03-21. 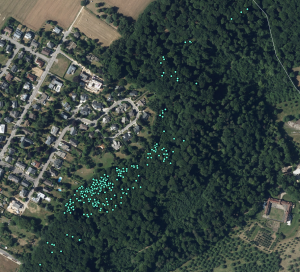 Since 2020, a project has been running on behalf of the MNHNL in cooperation with two forestry offices to map Prunus laurocerasus in their forest areas and to develop control methods: in principle, small specimens are uprooted, medium-sized ones are dug up and large ones are curled. The experience and knowledge gained are then incorporated into control recommendations. Initial mapping shows that the species has spread rapidly in recent times. 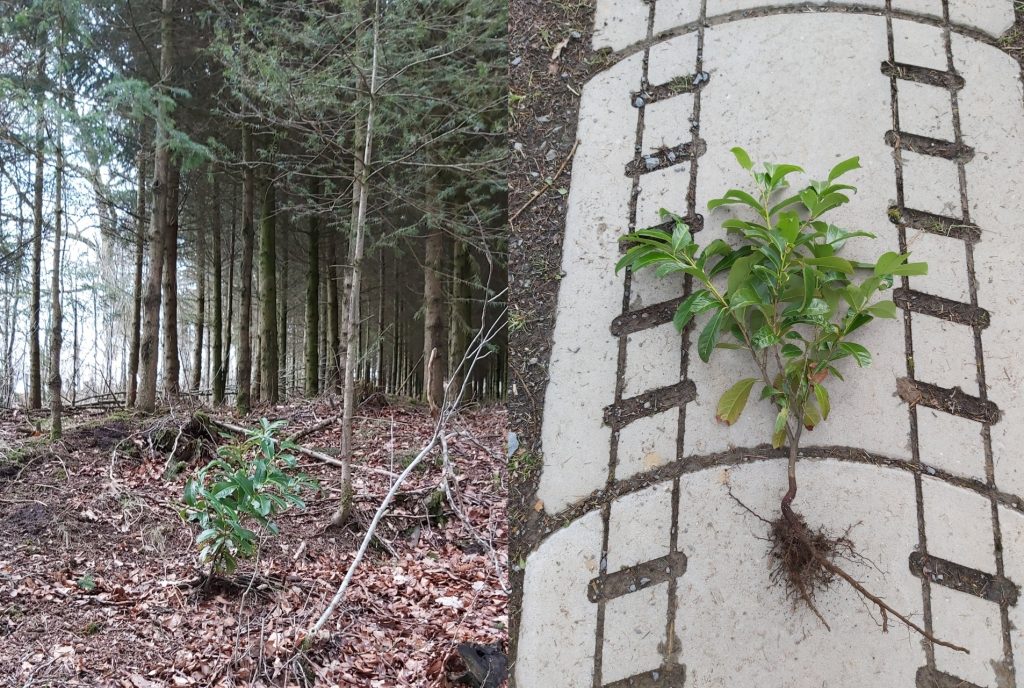 Management in the Steinsel forestry district 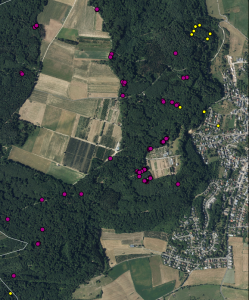 The cherry laurel is mainly found on the Luxembourg sandstone plateaus, usually around nurseries and on the outskirts of settlements. In general, a main plant establishes itself in the forest and multiplies horizontally by shoots. Removal from sandy soil is fairly easy and allows the plant to be removed almost entirely.

About 30 cherry laurel plants were removed in the Steinsel forest district in 2020. The removal of this plant is done manually, with simple tools (square cross pick, spade). Moving through the forest is done on foot. The uprooted cherry laurels are then thrown into a communal “household waste” container which will be transferred to the SIDOR incineration plant in Leudelange. The only thing left to do is to check the areas for rootlets later (Lichtenberger 2020).

Native hedge plants as alternatives to the cherry laurel

The following species are good alternatives[2]Source: https://www.haus.de/garten/heckenpflanzen-8-alternativen-zum-kirschlorbeer for creating a privacy hedge: