→ Report Obama nungara to the National Museum of Natural History.

Obama nungara Carbayo, Álvarez-Presas, Jones, Riutort 2016 is a medium-sized land planarian with a lanceolate body, being up to 70 millimetres long. The species is native from South America. Populations in the two southernmost Brazilian states, Santa Catarina and Rio Grande do Sul are most certainly native. The species is also found in Argentina, where it may be native or introduced. It is very common in human-disturbed areas, especially gardens and parks.

Obama nungara was probably introduced to Europe through the plant trade. Since 2008, a large land planarian has been found in several localities in Europe, including Guernsey, Great Britain, France, Spain, Italy and, more recently, Belgium, the Netherlands and Slovakia. It was identified as possibly of Neotropical origin and belonging to the genus Obama, but its true identity was not resolved at first. In a study published in 2020, Obama nungara was recorded from Italy, Switzerland, and 72 of the 96 Departments of Metropolitan France. The species was especially abundant along the Atlantic coast, from the Spanish border to Brittany, and along the Mediterranean coast, from the Spanish border to the Italian border. More than half of the records were from an altitude below 50 m, and no record was from above 500 m. However, in 2019, a specimen was found on São Miguel Island (Azores) at an altitude of 947 meters.

Local abundance in continental Europe was considered impressive, with hundreds of specimens found in a small garden. On the basis of a molecular analysis, the study also concluded that the population which has invaded several countries in Europe came from Argentina, not Brazil.

Obama nungara is a predatory flatworm that actively hunts earthworms and snails. Because of its hunting behaviour and its wide distribution, it might be the most dangerous land planarian for biodiversity and soil ecology in Europe. It has no natural predators in Europe (Wikipedia contributors 2022).

Obama nungara has not been documented in Luxembourg yet. 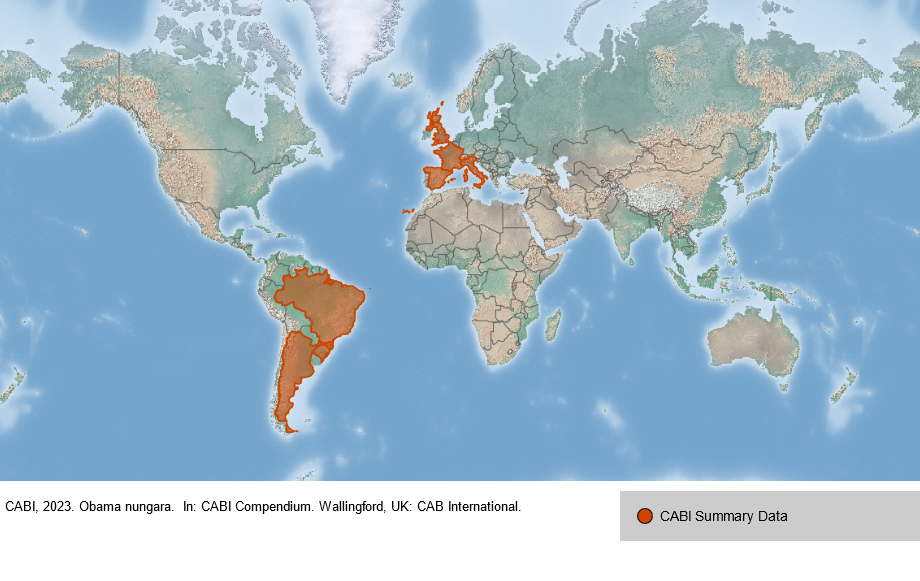