→ Report Heracleum mantegazzianum to the National Museum of Natural History. 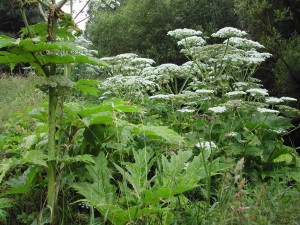 Heracleum mantegazzianum Somm. et Lev. inhabits moist and nutrient-rich soils in ruderal places, along roadsides, riverbanks and forest margins, in abandoned or neglected grasslands and in tall-herb communities. It is poorly represented in old successional stages but can occur in open alluvial forests. It usually invades sites with a low management intensity. Seeds are usually dispersed in the vicinity of mother plants except when growing near rivers. In that case, they may be transported over several kilometres.

The enormous height and leaf area of the giant hogweed enable it to overtop most indigenous herbaceous plant species typical of early stages of natural successions. It may form dense populations that absorb up to 80% of the incoming light and out-compete most light-demanding species. However, its abundance decreases in old successional stages due to competition with trees. Besides the ecological problems, tall invasive hogweed species also represent a serious health hazard for humans. The plant exudes a clear watery sap, which contains several photosensitising furanocoumarins. Upon contact with human skin and in combination with ultraviolet radiation, these compounds cause severe burning of the skin (Branquart et al. 2010).

In 2017, Heracleum mantegazzianum Somm. et Lev. was added to the list of invasive alien species of Union concern (Anonymous 2017) which implies that member states shall take all necessary steps to prevent it’s unintentional introduction or spread.

The melliferous plant Heracleum mantegazzianum Somm. et Lev. was introduced to Luxembourg by the Luxembourg botanist Edmond Joseph Klein (1866-1942) in the 1930s. In 1935, a flowering giant hogweed made his front garden in avenue Grande-Duchesse-Charlotte in Luxembourg City an attraction for naturalists and beekeepers, who collected seeds to grow the plant in their gardens or near their beehives (Reichling 2008). This explains why many large populations of this plant in Luxembourg are a result of plantation by beekeepers. As the species is perennial and needs at least one year to develop before flowering, we can assume that Klein introduced seeds of the species to Luxembourg before 1934 and sowed them in or before 1934, which we consider the first record of the species in Luxembourg.

The south-west Asian species was first documented in 1980 near Garnich by Léopold Reichling (1921-2009): “A colony of about a hundred feet is known to be located N of the Luxembourg-Arlon railway line east of the Garnich-Windhof road. Recent road works have reduced its importance.” (Reichling 1990: 62; MNHNL 2000-).

Giant hogweed was getting very common and widespread in Luxembourg during the period 2000-2010. It generally occurred in small clusters along river banks, several major rivers of Luxembourg having been affected. Sometimes the species formed dense stands along rivers, bicycle ways and rail roads or on waste land.

Since 2008 many stakeholders are involved in control measures resulting in the decline of the species, as shown in the most recent national survey on selected neophytes along major rivers in 2013. This might result in the downgrade of the ISEIA-code of the species (A3) in future risk assessments.

While 540 records of this melliferous species are listed in the MNHNL-mdata online portal, only 55 of these observations have been made in the last four years (2015-2019) (MNHNL, iNaturalist & GBIF 2019). As is the case for many species, the map doesn’t reflect the actual status of the species, but its historical distribution accumulated in time.

Cultivated for ornamental use in parks and gardens. Subspontaneous or naturalized, quite rare, mostly widespread in urban areas and along highways; often abundant in its stations. Introduced in Brussels in the 1930s, this species has experienced, especially since the 1980s, a strong expansion in the Flora territory, as in other regions of Europe (Lambinon & Verloove 2012: 524).

Hybrids and other taxa

Other taxa that are more or less neighbouring are also sometimes cultivated for ornamental purposes. Thus, the subspontaneous state of Heracleum laciniatum Hornem. (Syn. Heracleum giganteum Hort.) has been reported in the territory of the Flora, but it has been hypothesized that they would actually be hybrids of Heracleum mantegazzianum × sphondylium. The taxonomy of large Asian Heracleum species introduced into Europe should be re-examined (Lambinon & Verloove 2012: 524).

Since 2008, the Luxembourg Water Management Authority is systematically controlling giant hogweed on the river banks of the major rivers of Luxembourg and is running special units for this purpose.

The Upper-Sûre Nature Park in the north-west of Luxembourg (Ardennes) runs a monitoring and management plan on giant hogweed since 2009 in the frame of the national action plan “Heracleum mantegazzianum” (Krippel & Richarz 2013). The inventories show a prevalence of H. mantegazzianum populations in two valleys i.e. Harelerbaach and Dirbech, where the plants are growing predominately on riversides and alluvial meadows. Since 2009, the management plan is annually reviewed and consequently executed in the Upper-Sûre region. Giant hogweed is controlled by root cutting and, in the case of flowering plants, by umbel removal. These simple mechanical methods give excellent results, but have to be continued for several years, until the soil seed bank is depleted, especially in the valleys of the Surbich and Harelerbaach (Krippel & Colling 2014, 2016; Krippel et al. 2018: 64). At Tutschemillen, this invasive exotic species remains despite its regular elimination by the services of the Haute-Sûre Nature Park (Krippel et al. 2020: 39).

Since 2009, after a sensitisation campaign by the Nature and Forest Agency, several foresters systematically control giant hogweed in their areas.

Since 2010, the city of Luxembourg systematically controls hogweed on its grounds, especially along the Alzette river.

In 2012, three workers of the national railway company CFL were burned by giant hogweed while cleaning up an overgrown area of a railway station. A survey of several neophyte species on the national railway network (Pfeiffenschneider et al. 2014d) resulted in four sites identified with Heracleum, which were subsequently controlled in the same year.

In order to facilitate the control, an auger was developed by a Dutch company (https://www.eijkelkamp.com). The giant hogweed auger removes the roots of the giant hogweed ergonomically and effectively, preventing the plant from germinating again. For effective control, it is advisable to remove the roots from the non-flowering specimens both in the spring before flowering and in the autumn. The auger body is 33 cm long, with a diameter of 89 mm. The one-piece auger has a total length of 111.4 cm. The auger is easily emptied using a bent spatula.

The Department of Ecology of the National Museum of Natural History made two surveys among physicians in Luxembourg on burns caused in 2008 and in 2011 and 2012 (cf. Ries et al. 2013). Results showed that there have been at least 60 cases of burns in 2011 and 2012, while the previous survey back in 2008 resulted in no feedback on burn cases. These features are in line with the ongoing spread of the species in that period in Luxembourg. Most victims were aged between 18 and 60 and have been affected by burns in summer. The severity of burns ranged from not severe to medium. 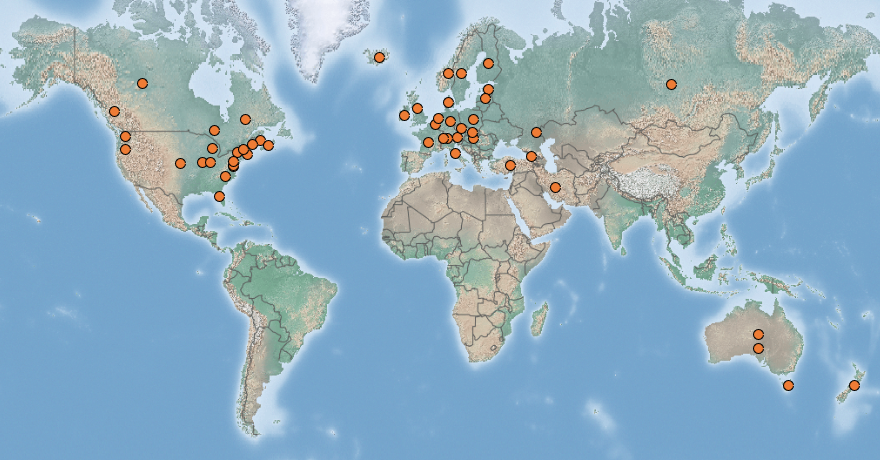