→ Report Aedes japonicus to the National Museum of Natural History.

Please refer to the Internet page https://mosquitoes.lu/dealing-with-mosquitoes/ for detailed information in 5 languages (

) on how to deal with mosquitoes near your home.

3 female imagoes of Aedes japonicus (Syn.: Hulecoeteomyia japonica) were captured on 4th July 2018 in Stolzembourg, Oesling. Field exploration on 1st and 2nd August showed the East Asian bush mosquito is also present in Bivels, Vianden, Wahlhausen and Gemünd (D). Further field studies in August and October 2018 revealed the presence of a large population of Aedes japonicus, detected in 16 sites distributed over 12 localities, 12 municipalities, 7 cantons and 3 districts. The colonised area can be estimated to date to cover at least 550 km², located in the east of the Grand Duchy, from the valley of the Our in the north to Ernster in the south, and as far as Kautenbach and Ettelbruck in the west. The mosquito was not detected in neighbouring Belgium (Clairefontaine and Ouren) but it was in Germany, where it has been present for several years in Rhineland-Palatinate and from where it has certainly migrated to the Grand Duchy. We also detected it in the French border town of Contz-les-Bains, which suggests that the mosquito is probably present, although not detected to date, in the region bordering the Moselle, from Manternach to the French border (Schaffner 2018). 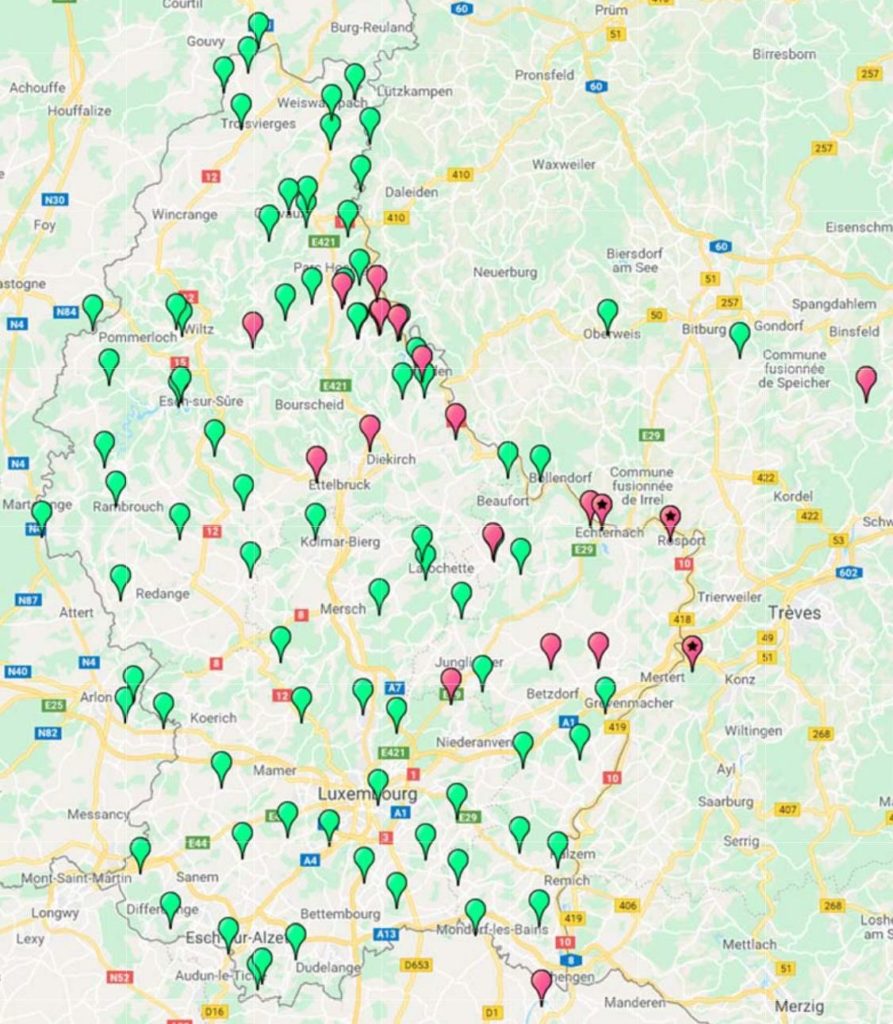 Distribution of the mosquito Aedes japonicus known as of 10 October 2018, for Luxembourg and the neighbouring regions of Germany, Belgium and France. Purple: proven presence; Purple with star: data from the German surveillance network; Green: undetected presence. Source: Schaffner 2018.

The species is established in the Province of Namur (Belgium), in North Rhine-Westphalia, Rhineland-Palatinate and Hesse (Germany), and in Bas-Rhin, Haut-Rhin, Vosges (France).

Aedes japonicus is a mosquito species originally native to Japan, Korea and southern China, and is important for humans as a potential vector of pathogens such as the West Nile virus and of various types of encephalitis viruses.

Initial importations and spread in Europe

Aedes japonicus was first reported in Europe in 2000 when it was detected in Normandy (Orne) in northern France, where it was later eliminated. It was then reported in 2002 in Belgium at a tyre depot and presence as adults and larvae was confirmed in 2007 and 2008. It was most likely introduced through the trade of tyres and the population was thought to be established at the company site but does not appear to be spreading. It was detected in Switzerland in 2008 following reports of a biting nuisance and subsequent surveys revealed a 1,400 km colonised zone including an area in Germany. This was the first detection of invasive mosquitoes spreading in central Europe. No obvious route of introduction was identified in this study but it is suspected that the species has been present here for some time. Adult Ae. japonicus were then found in southern Germany during 2011, following intensified surveillance. This resulted in surveillance expanding to cover the entire federal state of Baden-Württemberg where a reduction in the colonised areas compared to 2010 was reported (possibly due to a dry spring during 2011). However, a large, newly infested area was also reported from the city of Stuttgart to the Swabian Mountains. Entomological surveys carried out during 2012 in North Rhine-Westphalia also revealed the presence of an established population in the west of the country. Aedes japonicus were then reported further north in southern Lower Saxony and northeastern North Rhine-Westphalia during spring 2013. It was detected in 2012 and 2013 in Lelystad, the Netherlands. 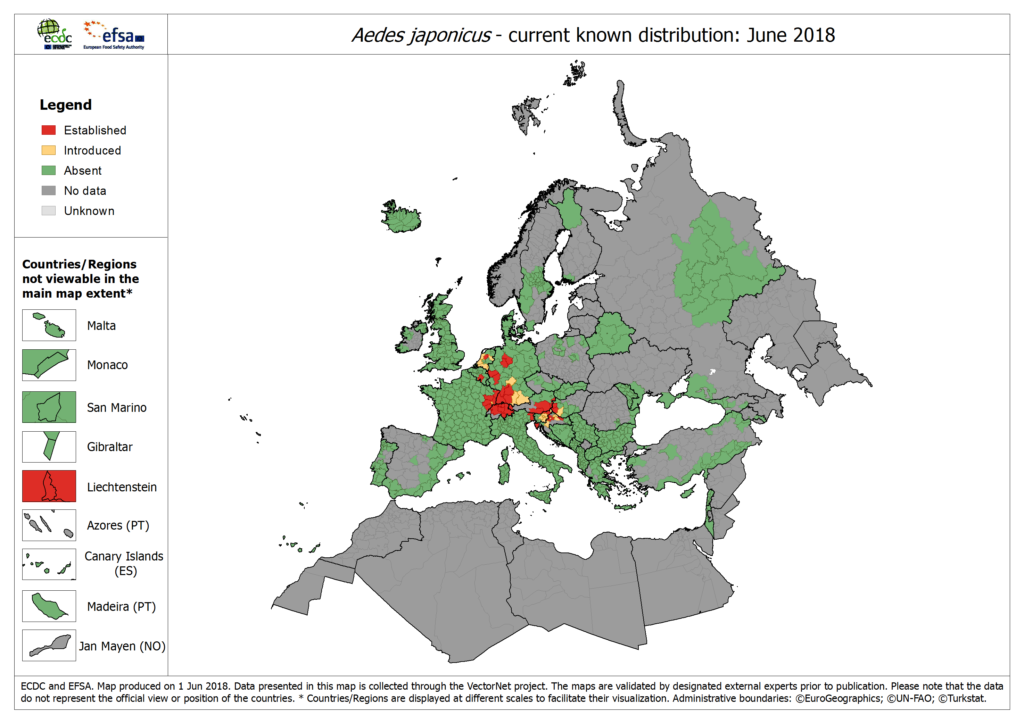 Source: European Centre for Disease Prevention and Control: The map shows the current known distribution of Aedes japonicus in Europe at at ‘regional’ administrative level (NUTS3), as of June 2018.

It is suggested that Aedes japonicus may expand beyond its current geographical distribution but there is still a lack of information available on this invasive mosquito species.