Notes on taxonomy and nomenclature

On February 4, 2020, we changed the title of this page from Ovis ammon (Linnaeus, 1758) to Ovis aries musimon (Pallas, 1811) according to the CABI fact sheet: “Given that it is generally assumed that European mouflons are feral populations of ancient domestic stocks, it is advisable to denominate them taxonomically as Ovis aries (…), subspecies musimon, which is the name used in this datasheet, following ITIS (2016)” (CABI 2016). For more details read the detailed “Notes on Taxonomy and Nomenclature” in the CABI fact sheet (CABI 2016).

Other scientific names in use in Luxembourg

Mouflons in a wildlife park in the Eifel (Rhineland-Palatinate, Germany) in August 2008

The European mouflon is the westernmost and smallest sub-species of mouflon. It was originally found only on the Mediterranean islands of Corsica and Sardinia, but has since been introduced into many other regions of Europe (Wikipedia contributors 2020).

The European mouflon is a small sheep, particularly compared to its Asian relatives and to some domestic breeds. Sexual dimorphism is present, with males weighing about 30% more than females. Both sexes can exhibit horns, although not all females (and none in the Sardinian population) do. The horns of males can be up to 60 cm long and are curved into a circle. The coat colour is reddish-brown; darker in winter, when males have a black mane with whitish tones on the snout, the ventral area and the distal part of the legs (Asian mouflon from Asia Minor and Iran have more distinct colours). The whitish tones of the face increase with age. The anal white coat is well marked. The tail is black and short. Mouflons have thick skin and wool; the dense winter coat is shed in spring. Males are more robust than females and possess long hair on the neck, chest and front of the forelegs; they also show a characteristic side spot, the “saddle”, of whitish tones, which is much less marked in females (CABI 2019).

The European mouflon is a wild sheep that originates from the Mediterranean islands of Corsica and Sardinia; it is thought to be descended from semidomesticated wild sheep from the Near East brought to Sardinia around 8000 years ago. It has been introduced to many countries in Europe and some elsewhere, mostly as a quarry species for hunting; the extent to which populations have become established or increased varies from country to country. In most countries there is little evidence of serious adverse effects (although there has been little research on the subject), but the mouflon is considered invasive in Hawaii and the Canary Islands, where it has had serious adverse effects on native vegetation (CABI 2019).

As early as the 18th century mouflons were introduced in various regions of Europe (Niethammer 1963 cit. in: Massard & Kintziger 1994: 187).

Health issues of mouflons outside their home range

Mouflon are a longstanding matter of concern in most regions outside their home range. Not well adapted to most of the habitats where they have been released, many animals are suffering from problems with their hooves (foot rot, hoof overgrowth; Piegert & Uloth 2000) (Apollonio et al. 2010).

In the case of the mouflon, NABU North Rhine-Westphalia demands that this non-native species be completely shot down for reasons of nature conservation and animal protection, because the individuals, optimally adapted to life on rocky islands, develop hoof problems as a result of the soft soils prevailing here. Their hooves often grow extremely long and cause considerable pain. They also increase the pressure on the natural growth in the forest. Furthermore, mouflons damage rare biotopes such as rocky heads (NABU, 2020).

Currently, mouflons are present in three areas of Luxembourg: the Our valley, the northern Upper Sûre area and around Heffingen/Echternach (Massard & Kintziger 1994; Schley & Herr 2019: 34).

A former population in the Meysembourg area is extinct (Lux 2005). The grand ducal compound (“Gatter”) at Grünewald near Imbringen was opened to the public in 2009 (SPC 2020).

A male mouflon was run over near the animal park “Escher Déierepark” at Gaalgebierg in Esch-sur-Alzette in 2012 (MNHNL 2000-), it can be assumed it was an escaped animal.

Currently, 35 records of mouflons are accessible through the MNHNL-mdata portal (MNHNL, iNaturalist & GBIF 2020).

The mouflon in the regions of Luxembourg

The cited sources don’t mention if this population still existed in the 1990ies. The grand ducal compound in Grünewald (nicknamed “Gatter”) was opened to the public on 9 April 2009, following the agreement of 16 January 2009 between the Luxembourg State and the grand ducal administration (SPC 2009).

In 1968, on the proposal of the High Council for Hunting, the Minister of the Interior instructed the Water and Forestry Administration to prepare the introduction of mouflons into the Luxembourg natural environment in the Kaundorf region. In 1970, 14 animals were released into the natural environment near Kaundorf. Since then, and until the beginning of the 1990s, the population has been steadily increasing due to the rather restricted shooting plan: the population numbers about 200 animals and has proliferated over an area of about 9,000 ha. In 1994, in view of the poor health situation of the herd and the numerous damages caused to the forest, the mouflon hunt was widely opened and the shooting plan was abolished. In the 2000s, the population stabilizes at about 60 individuals (spring counting) (Lux 2005).

The mouflon population around Hosingen originates from the former wildlife park “Wildpark Hosingen”, which existed between 1970 and 1984 and where deer, wild boars, fallow deer, mouflons, mountain goats and indigenous bird species were introduced to visitors in enclosures on an area of around 150 hectares (SISPOLO 2015).

The park had financial problems from 1983 (Lux 2005) and shut down in 1984. This was followed by the escape of some of the animals (fallow deer and mouflons). In the 2000s, the mouflon population numbers about 30 individuals (spring counting) (Lux 2005).

A mouflon enclosure was established in Meysembourg in 1972. Shortly afterwards, several animals fled and settled in the Christnach/Heffingen region. In the 1980s, the population numbered about 100 animals. In 1984, severe barking damage was noted, followed by a wide opening for hunting from 1985 onwards. In 1993 the population became extinct (Lux 2005).

As far as the Echternach region is concerned, there is a strong presumption of illegal releases (Lux 2005):

At the end of February 2005, a new population count by the Water and Forestry Administration (before the calving) indicates that the mouflon population in the region before the calving in March 2005 was 264 head. The female sex predominates in the composition of the herds in the Echternach region. Based on observations in recent years, it can be said that the population always increases by one third after giving birth. The population in the Echternach region should therefore have reached the current level of ± 350 animals (Lux 2005).

The mouflons cause different kinds of damage. For example, the following damage can currently be seen in the Echternach region (Lux 2005):

In the summer of 2003, an inventory was carried out in the canton’s forests of Echternach, to determine the debarking damage caused by the mouflons, resulting in a damaged area of 18,79 ha. The damaged species are mainly spruce and Douglas fir, the hardwood species are less affected by debarking. Recently it has also been observed that natural regeneration of beech has been damaged by mouflons (bud browsing) (Lux 2005).

In 2020, in the press, various statements are made about the damage caused by muffled animals:

The addition of the administrative hunt to the law on hunting

Note: this chapter is an excerpt of the answer of Lucien Lux (2005) to parliamentary question n°377.

Since the first appearance of mouflons in the region of Echternach in 1995, the administration of Water and Forests has been very concerned about this presence. Since the mouflon is not a native species and there are no other populations of this species in the region, it soon became clear that the population could only be the result of clandestine or even illegal releases, without it having been possible so far to establish who was responsible.

As the sheep population continued to grow, on the initiative of the Minister of the Environment two meetings were held in autumn 2003 with tenants and representatives of the hunting unions in the Echternach region to find a solution to the worrying situation. At these meetings, the final goal was clearly formulated, namely to achieve a “zero” mouflon population within a reasonable period of time (5 years) by means of hunting. To this end, the Water and Forestry Administration had developed various models for reducing the population. The following recommendations were made to hunting tenants: priority should be given to shooting female animals and an attempt should be made to reduce the population by more than half in the first hunting year. This proposal was accepted by the representatives of the unions and the hunters, and voluntary commitments were signed by all hunting tenants.

At the end of winter 2004/05 (March 2005), the Water and Forestry Administration analysed the current situation and drew up an interim assessment of the commitments made by the hunting tenants. It turned out that the situation has not improved at all, but on the contrary has worsened. Although some hunting tenants have made an effort to shoot as many animals as possible, this does not seem to be the case for others. Indeed, recent counts carried out by the Water and Forestry Administration at the end of February 2005 show that the combined effort of all hunting tenants has been absolutely insufficient.

The current hunting legislation does not confer any right of direct intervention by either the Ministry of the Environment or the Water and Forests Administration to reduce a game species once the animals are in a state of natural freedom. The Government is therefore relatively powerless in the face of this situation and must confine itself to recommendations.

This is why the Minister of the Environment recently tabled a bill amending the hunting legislation and including the following point: introduction of the right of initiative for the State with a view to organizing administrative hunting under certain well-defined conditions, alongside the right of initiative of the hunting syndicate, which is to be maintained. The conditions which must be met before the administrative hunting procedure can be initiated are as follows: 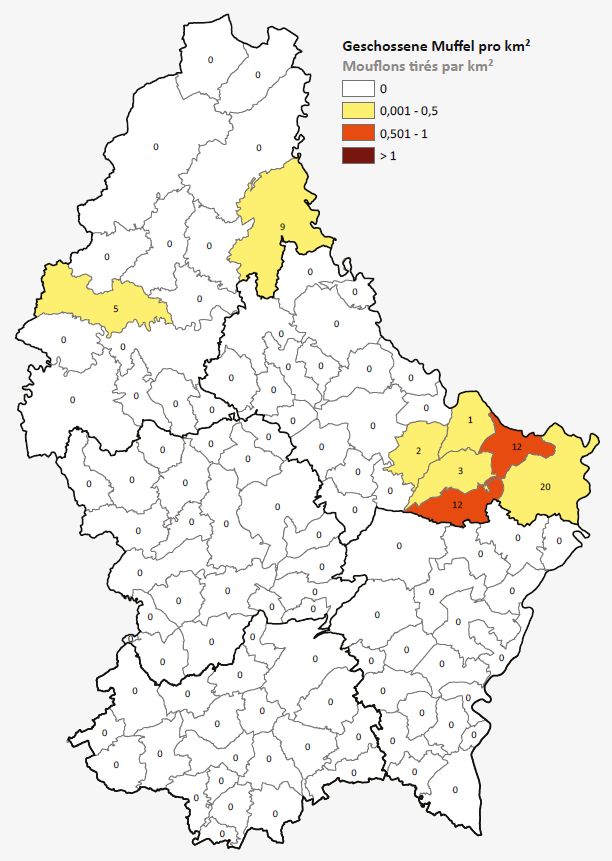 The geographical distribution of shot mouflons for the hunting year 2017/18 (see map on the right) is in line with the mouflon distribution (see above) based on data from Recorder-Lux, GBIF and iNaturalist (MNHNL, iNaturalist & GBIF 2020).

In February 2020, the Ministry of the Environment planed an administrative hunt for mouflons in the Echternach region which was not carried out yet (2020-03-12)[1]On 29 February 2020 a private hunt on mouflon took place in the Echternach region.. End of 2019, the Higher Council for Hunting (Conseil supérieur de la chasse) had given the go-ahead for this hunt (Magar 2020).

The public debate on mouflon in Luxembourg

From the end of February 2020 onwards, the debate surrounding the mouflon hunt was the subject of controversy, hateful debates and excesses on social networks in Luxembourg.

On February 28 2020, the political party “Piratepartei Lëtzebuerg” posted a video on its Facebook account criticising the Minister of the Environment, Climate and Sustainable Development Carole Dieschbourg for her position in the hunt for mouflons (Piratepartei Lëtzebuerg 2020; Pautsch 2020).

Following a series of hateful and threatening comments against her, Carole Dieschbourg announced on 4 March 2020 via her Facebook account to take legal action (Dieschbourg 2020c; Frati 2020). 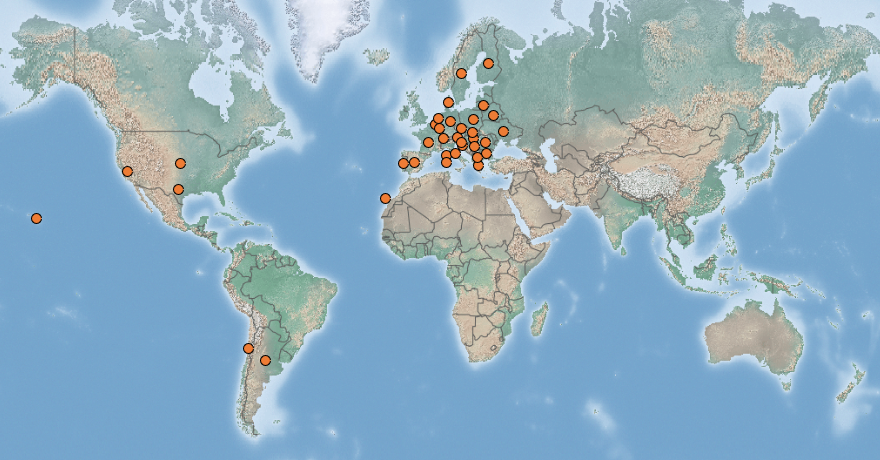