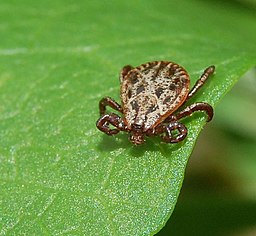 Dermacentor reticulatus Fabricius, 1794 is a species of tick within the Ixodidae family. It is the type species for the genus Dermacentor. D. reticulatus is an ornate tick. The female varies in size from 3.8–4.2 mm (unfed) to 10 mm when engorged after feeding. The unfed male is 4.2–4.8 mm long. D. reticulatus is found in Europe and Western Asia, generally in wooded areas. D. reticulatus is a vector of various disease organisms, including Babesia canis, Francisella tularensis, Coxiella burnetti, Theileria equi, and several Rickettsia species, such as Rickettsia slovaca (Wikipedia contributors, 2020).

As a habitat, the marsh tick prefers humid areas such as riparian forests and moors as well as deciduous forests. Marsh ticks require a summer temperature of 20-22 °C and rainfall of 400-1000 mm. The ticks are cold-tolerant and can survive hard winters. Originally found in Hungary, Austria and northern Italy, the distribution area of the marsh tick has expanded strongly northwards since the 1970s. In Germany, the first natural population was described in 1973 on the Upper Rhine, and it was probably introduced by dogs. There are now free-ranging populations throughout Germany. Likely causes are an increase in natural biotopes, the associated increase in intermediate hosts, and global warming (Wikipedia Bearbeiter, 2020).

Between 2015 and 2020, six Dermacentor ticks were collected in the south of Luxembourg (MNHNL, iNaturalist & GBIF 2020). Previously, these individuals had been identified as Dermacentor marginatus Leach, 1815. However, morphological re-investigation as well as DNA barcoding identified the specimens as Dermacentor reticulatus Fabricius, 1794. Thus only D. reticulatus is known from Luxembourg (Weigand et al. 2020).

No risk assessments have been done to date.