→ Report Cornus sericea to the National Museum of Natural History.

Cornus sericea L. is mostly found on moist to humid eutrophic soils, where it can live with the roots submerged in water for most of the growing season. It thrives in early successional stages of riparian swamps and woodlands, but also in the understorey of open forests, along forest margins, in meadows and ruderal habitats. The plant is able to tolerate extremely cold temperatures. It is autosterile and pollinated by insects. Seeds, that are primarily dispersed by birds, have a double dormancy that needs both cold stratification and passage through bird guts to germinate. As it is commonly used as an ornamental plant and grown in gardens and public green areas, humans also contribute to the dispersion of this shrub. It is increasingly observed in the wild [in Belgium], most of the time obviously as an escape from cultivation.

In open conditions, Cornus sericea has a very high growth rate and produces abundant flowering. It can quickly cover high surfaces and make a dense canopy, which reduces the development of native vegetation, strongly decreases plant species richness, reduces tree seedling establishment and inhibits succession development. Density can exceed 100 000 stems per hectare. Under a closed canopy, the plant doesn’t produce flowers but emits long and horizontal axes that root and give rise to many stocks. This allows it to achieve great lateral exploration and to migrate to a more favourable area or to wait until opening occurs. It is considered as a weed in the floodplains and in forest openings of its area of origin (Branquart et al. 2011).

Cornus sericea L. was first documented in Luxembourg as its subspecies Cornus sericea ssp. sericea under its synonym Cornus stolonifera Michx. by Jean Feltgen in July 1887 in the park of Kockelscheuer, municipality of Luxembourg (Herbier specimen № 10659, MNHNL 2000-).

Currently, 6 records of the red-osier dogwood in Luxembourg are accessible through the MNHNL-mdata portal (MNHNL, iNaturalist & GBIF 2019).

This species originates from North America and is naturalised in Europe (mainly central). Grown for ornamental purposes in parks and along roads. Subspontaneous or naturalised here and there: old parks, groves, fresh thickets (Lambinon & Verloove 2012: 441).

A related species, Cornus alba L. [Syn.: Swida alba (L.) Opiz; Thelycrania alba (L.) Pojark.], originally from Siberia, is also grown for ornamental purposes. It is distinguished by its generally smaller leaves (leaf blade 4-11 cm long), erect and general non-rooting shoots and especially by the fruit stones: longer than broad, and narrow at the base, whereas they are about as long as broad and truncated-rounded at the base in C. sericea. C. alba has sometimes been mentioned in the subspontaneous state, but perhaps by confusion with C. sericea. Variants with leaf blades mixed with green and yellowish or whitish, which are not easily attached to either of these species, are frequently observed (Lambinon & Verloove 2012: 441). 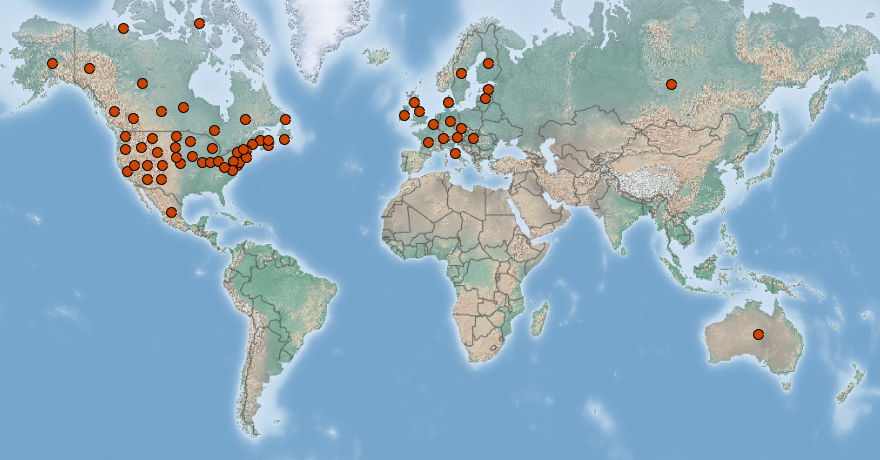