→ Report Ailanthus altissima to the National Museum of Natural History.

Ailanthus altissima (Mill.) Swingle is a fast-growing, light-demanding and thermophilic pioneer tree species. It grows best on nutrient-rich soils and is very tolerant to dryness and air pollution. It is mostly found in waste and disturbed areas, but can also invade different kinds of forest ecosystems, riparian areas, rock outcrops and semi-natural grasslands. Winged seeds are easily dispersed by wind and water over distances exceeding several hundreds of metres (Branquart et al. 2017).

Ailanthus altissima successfully displace native vegetation due to its rapid growth and root suckering. It produces allergenic toxins in bark and leaves. As these accumulate in the soil, they inhibit the growth of other plants (allelopathic interactions), favour the formation of monospecific stands and inhibit vegetation succession. Ailanthus also increases soil N content and pH. Ailanthus can reduce soil water availability in case of severe infestation. It may damage roads and other infrastructures due to strong and rapid root development (Branquart et al. 2017). The root system is aggressive enough to cause damage to sewers and foundations (GISD 2019).

In 2019, Ailanthus altissima was added to the list of invasive alien species of Union concern (Anonymous 2019) which implies that member states shall take all necessary steps to prevent it’s unintentional introduction or spread.

The oldest reference to Ailanthus altissima in Luxembourg is found in the flora of Krombach (1875: 108) who lists it as a cultivated species. To mention an old example, Jean Feltgen (1833-1904) included a specimen from a garden in Diekirch in his herbarium, unfortunately without mentioning a date (Specimen № 15467, MNHNL 2000-). It can still be considered the first documented record of the species before 1905, within Jean Feltgen’s lifetime.

The first documentation of the tree of Heaven in the wild dates from 2013, when Jerry Grün reports a grown specimen in a forest edge near Elvange (Ries & Krippel 2021). An earlier report on 13 July 1993 by Léopold Reichling in the Pfaffenthal district in Luxembourg City could not be verified as in the wild as it might have been part of the plantations in the gardens of the Hospice du Pfaffenthal (Obs. key: LUXNATFUND431045, MNHNL 2000-).

According to Lambinon & Verloove (2012: 463) the species is quite rare in urban areas (AR) and very rare in rural areas in the territory of the flora.

Ailanthus altissima is found in several parks in the country, including Tony Neuman Park (Hollman & Schroeder 1997: 22) and municipal park in Luxembourg City.

For two decades the species did not appear to have spread to the wild. It is only in recent years that the species was planted in several urban areas and appeared in the wild on sandstone cliffs in Luxembourg City (cf. also Krippel et al. 2020: 32). 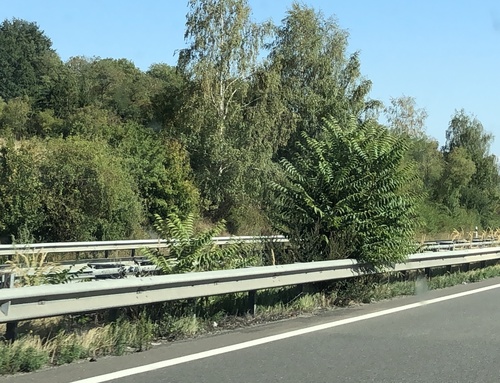 In 2020, the salt-tolerant Ailanthus altissima was detected for the first time in a motorway median strip (A1 motorway near the port of Mertert, Yves Krippel, 2020-09-07, iNaturalist).

Considering the recent expansion of the species in Luxembourg and its probable future increased spread due to climate change, and to avoid major problems urban areas experience with the tree of Heaven as a weed across Europe, Ailanthus should not be planted any more as an ornamental tree and existing populations should be eradicated. 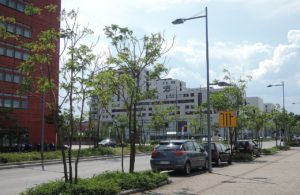 In a few decades, with climate change helping, Ailanthus might grow in many pavement rinds, flowerbeds and vague grounds all over these sites and possibly into the wild in adjacent areas, as illustrated in the following example from planted tree in a roundabout north of Mersch:

Ailanthus in the wild

In 2018, three populations of Ailanthus altissima were sighted in the wild in Luxembourg City:

A recent study in Berlin concludes that urban management strategies concerning Ailanthus would gain support from citizens when combining multiple approaches (Kowarik et al. 2021): (i) to control the species in case of realized negative impacts; (ii) to prevent the invasion of the species in areas of conservation concern; and (iii) to develop novel approaches of integrating wild Ailanthus trees into urban green spaces. These insights could support management measures that need to be established due to the EU-Regulation on Invasive Alien Species.

The action plan dedicated to the tree of heaven, designed to limit the spread and minimise its in Luxembourg, was drafted in 2020 (Pfeiffenschneider & Hoppe 2020) and submitted for a 60 days lasting public consultation on 9 September 2020. It clearly postulates that, if its population continues to increase, this species is likely to cause ecological and economic damage. 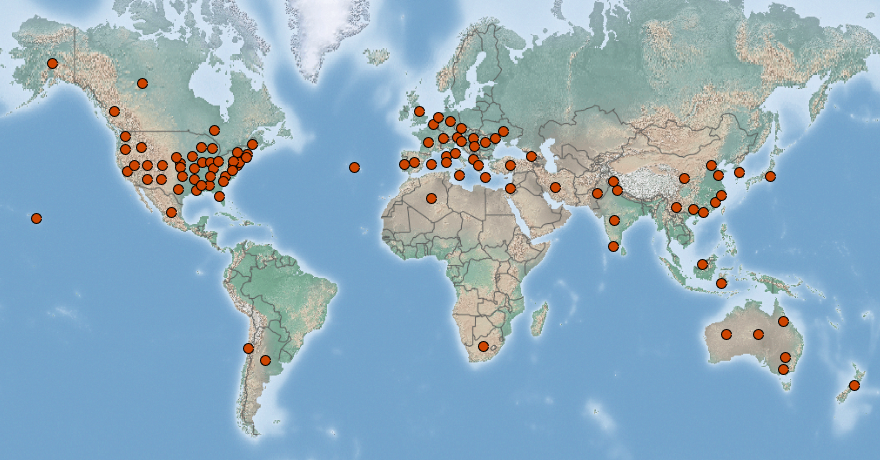