As an invader in Europe, the hornet has appeared in France, Spain, Portugal. Further invasions are expected in various countries, including much of Europe.

As it is currently spreading from the south towards the north of France, we expect this wasp species to arrive in Luxembourg quite soon. This is why a leaflet was produced to enable people, and especially bee keepers, to identify the species and report its presence to the authorities.

The leaflet has been produced by: 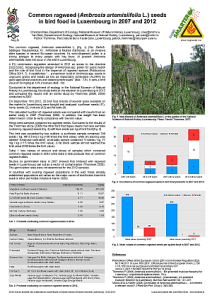 This study looks at the presence of common ragweed seeds in bird food in Luxembourg in 2012 and compares the results with an earlier study conducted in 2007. The study has been conducted by Christian Ries, Yan Steil and Patrick Thommes at the Department of Ecology in the National Museum of Natural History in Luxembourg,