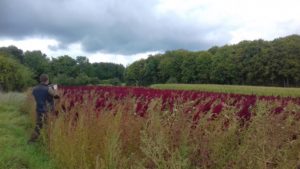 Amaranthus cruentus L. was first observed in the wild 1 in Luxembourg, on 28th August 2018, on the border of maize fields and a pasture between Ell and Lannen in the Canton of Redange (Midwestern area of Luxembourg).

An on-site inspection on 29th August 2018 revealed that the population extends over 300m at the edge of the fields and at the roadside between the coordinates LUREF 56775 E | 93241 N and 56758 E | 93542 N. Several specimens were deposited in the herbarium of the National Museum of Natural History.

This population is probably a consequence of the cultivation of this species on an adjacent field in 2017, as the photo on the right illustrates.